Our Price: Request a Quote

If you are currently working with another reseller you may not be eligible to receive any promotional items with your purchase. Please contact us before placing your order. BarraGuard.com.au reserves the right to deny free promotional items on any purchase.

Please Note: All Prices are Inclusive of GST

Barracuda Web Application Firewall blocks an ever-expanding list of sophisticated web-based intrusions and attacks that target the applications hosted on web servers and the sensitive or confidential data to which they have access. Placed between the Internet and web servers, Barracuda Web Application Firewall scans all inbound web traffic to block attacks, and scans outbound traffic to provide highly effective data loss prevention..

Barracuda Web Application Firewall simplifies application security so you can focus on your business. Its comprehensive feature set, versatile deployment options, and ease of use lets you automate many application security tasks, whether your web infrastructure lives on-site, in a virtualized environment, or in the cloud.

Develop and deploy new or updated apps fast, thanks to its full Rest API.

Seamlessly integrates with cloud-native services to provide security, control, and peace of mind.

Protect your APIs and mobile apps. 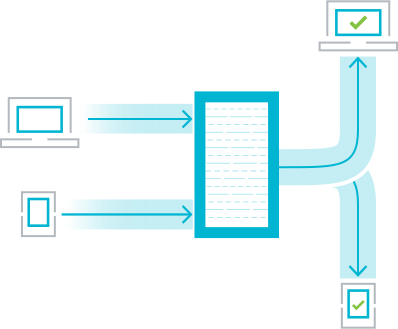 To ensure that only authorised personnel can access your application backends and data, Barracuda Web Application Firewall solutions integrate with AD, LDAP, and RADIUS, giving you granular control over which users and groups can access what data. They also secure all the services that rely on ADFS. SAML support provides a seamless single-sign-on (SSO) experience across your on-premises and cloud-hosted applications. Two-factor authentication further enhances security through integrations with RSA SecureID, SMS PASSCODE, Duo, and others. 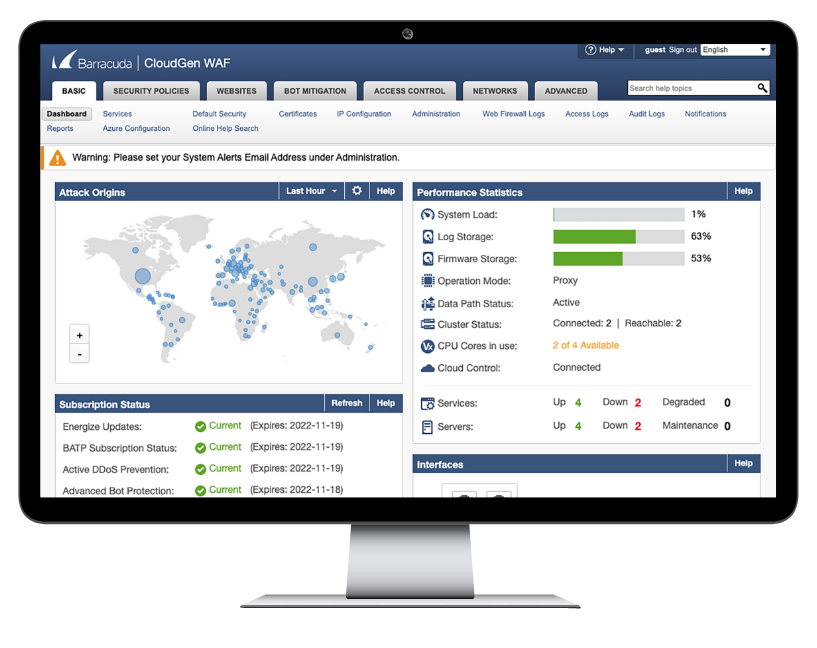 Barracuda Web Application Firewall features a detailed dashboard that presents vast amounts of data in the form of actionable insights that help you make informed decisions. System health and utilization, traffic patterns, subscription status, system performance, attack statistics and origin locations, and much more is layered into a streamlined dashboard that makes it all easy to interpret and use. Barracuda Web Application Firewall also supports many external SIEMs and log management tools such as Azure Sentinel, Loggly, Sumologic, HPE ARCsight, IBM QRadar, Splunk, and many more.

Protect your APIs and mobile apps.

Protect against all OWASP top 10 attacks, zero-day attacks, data leakage, and DDoS attacks. The layered traffic processing engine and Smart Signatures use fewer attack-detection signatures to detect and block web attacks, including zero-day attacks. Each Smart Signature can detect attacks found in 40 attack-specific signatures, reducing detection time and improving overall detection. Application Learning adds automated Positive Security, with the ability to enforce this security from the URL down to the parameter level.

Encrypt URLs before they are sent to clients, and ensure the original URLs or the directory structure are never exposed externally to prying eyes*. End users of the web applications interact and navigate the site using only encrypted URLs, which are decrypted by the WAF. The decryption process immediately identifies URL query or parameter tampering, malicious content injection or blind forceful browsing attacks. *Models 660 and above

Using client source addresses, organizations can control access to web resources. The Barracuda Web Application Firewall can control access based on GeoIP to limit access only to specified regions. It is also integrated with the Barracuda Reputational Database and can identify suspicious IP addresses, bots, TOR networks and other anonymous proxies that are often used by attackers to hide their identity and location. Once an IP address is identified as a risk, administrators have the ability to block, limit, throttle, or issue a CAPTCHA challenge before allowing access.

Seamless integration with Barracuda Advanced Threat Protection (BATP) to provide security against advanced threats. Simply add BATP to the Barracuda WAF to block advanced zero-hour threats. By analyzing files in a CPU-emulation based sandbox, it can detect, and block malware embedded deep inside files uploaded to websites or web applications.

Volumetric DDoS attacks are on the rise because the computational resources that are available to attackers make it very easy to launch full scale attacks that can bring an entire network down. Many times, the entry point for these attacks are web sites of organizations that bear the brunt of the load. Barracuda WAF offers a subscription-based DDoS protection cloud service that scrubs traffic before it reaches the intended websites. This allows the cloud service to identify patterns of DDOS attacks in the connections and block them.

Applications that rely on XML can now be secured with an XML Firewall capability that secures applications against schema and WSDL poisoning, highly-nested elements, recursive parsing, and other XML-based attacks. This secures communications between client and application or between applications from different systems closing an often-overlooked attack vector.

Attackers exploit third-party scripts to perform client-side digital skimming attacks, such as Magecart, to steal PII and financial data directly from the browser. These attacks are difficult to detect because these scripts are loaded directly by the browser and attackers are using sophisticated techniques to avoid detection with scanners and similar defensive methods. Barracuda Web Application Firewall offers Client-Side Protection, a feature that automates the CSP and SRI configuration, reducing admin overheads and configuration errors. In addition to these capabilities, the Barracuda Active Threat Intelligence layer provides visualization and reporting for these configurations, providing admins with deeper visibility into the usage of these scripts.

If you are currently working with another reseller you may not be eligible to receive any promotional items with your purchase. Please contact us before placing your order. BarraGuard.com.au reserves the right to deny free promotional items on any purchase.